Surge in search for single-family homes in the us

The US property market has been anything but quiet since April. Already suffering from a shortage of supply, the market has seen demand for single-family homes in the US soar to reach record highs. New-build permits and starts also rose in May indicating strong buyer interest.

Despite not being able to physically view properties during April and part of May, demand for property in the US shows no signs of falling. According to research by the property broker Redfin, demand currently runs at 25% ahead of pre-pandemic levels. In May, it rose to 26%.

This surge in demand contrasts strongly with the lack of supply. Many areas in the US already suffer an acute shortage of property with key markets registering just three or four months’ inventory. This is the case with single-family homes in Florida, for example - supply levels for this type of property in the Sunshine State has not risen above five months since Q1 2016.

Not all property is in equal demand and Redfin reseach shows that searches for single-family homes in the US have reached their highest level ever. In the period February to May, saved searches went up by 33%, which translates to 28% in the year. This represents the highest level on record for Redfin. 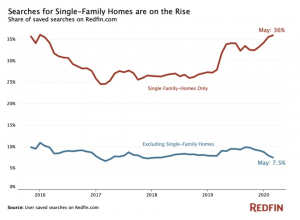 The company attributes the sharp uptick in the desire for larger homes after lockdown. Potential homeowners are more aware than ever of the need for extra space, both inside and outside. Redfin also reported a rise in demand for larger plots of land – searches in suburbia went up by 13% in May.

Hand-in-hand with the increase in demand came a sharp rise in competition for property. Redfin found that buyers were competing for almost half of all properties with some areas seeing even higher bigger struggles. Bidding wars took place in May for 64% of property in Boston and 60.8% in Dallas.

New-home starts and permits up

The home construction industry also had some good news in May. According to the Census Bureau, home starts went up by 4.3% with ground breaking on 934,000 new properties. The number of permits issued in May also increased with 14.4% more compared to April. Those for single-family homes in the US went up by 11.9%.

“Housing construction has turned a corner,” said Doug Duncan, Chief Economist at Fannie Mae, quoted in Forbes. He believes that housing starts will be equally strong in June because of the latent lack of supply and low interest rates.

Build for the market

The surge in searches for single-family homes on large lots and outside built-up urban areas offers strong land investment potential. Prime plots in sought-after locations will be in high demand over the coming months as their desirability becomes more apparent post-lockdown.

BRIC Group offers investors the opportunity to invest in land in Southwest Florida in one of the area’s most desired locations. Land purchase starts at US$26,500 and investors can opt for a new build upgrade to build a single family home to let or sell to a ready and waiting market.