Pandemic props up us housing market

Despite widespread unemployment and a drop in GDP growth this year, some sectors of the economy are thriving. They include the US housing market where strong demand, low mortgage interest and a shift in trends are driving property forward. As a result, house prices and pending sales surged in July.

Impact of covid-19 on housing plans

A recent survey by Redfin reveals that 75% of people say that covid-19 has impacted their plans. Specifically, 16% of those interviewed said they want to move house and 15% expressed the desire to move sooner than they had anticipated.

A higher percentage – one fifth of respondents – claimed that the pandemic has led to a delay in their buying plans. While 17% said they were looking to move to a less expensive area. The graphic below shows the full range of survey results. 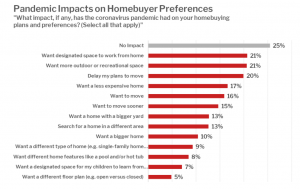 Virus propping up US housing market

“Somewhat counterintuitively, the coronavirus-driven recession is propping up the housing market,” said Redfin chief economist Daryl Fairweather. He believes that demand for homes is surging because “Americans value the home more than ever”. As a result, they are happy to spend more on housing and cut back on other expenses.

However, Fairweather points out that not everyone in the market will be able to buy a home. He underlines that despite more purchasing power through lower mortgage rates, unemployment and financial uncertainty will dissuade some buyers.

Covid-19 has also brought with it changes in how people want to live and these have a direct effect on the US housing market. The Redfin survey found that 21% of people now want a designated work space in their home. 7% would like a specific place for their children to do schoolwork too.

Outdoor spaces are also a priority for future homebuyers. 21% said they want to own a home with private outdoor space and 13% said they would like a bigger yard than their current one.

Driving the surge in demand for homes among Americans are three major factors:

The rise in demand has already affected statistics for the US housing market. At the end of July, pending sales were up 12% year-on-year, indicating the extent of demand. Median sales prices also rose and their 11% increase was the highest since 2014.

Analysts point to more of the same over the next few months. However, with inventory at all-time lows, many would-be buyers will find their dreams of purchasing frustrated. Rental properties are likely to be more in demand along with purpose-built single-family homes. The most sought-after will offer plenty of interior space with room for home offices and study areas and have large yards. 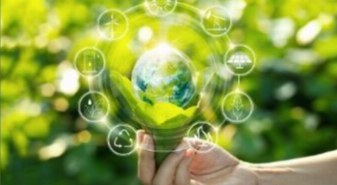 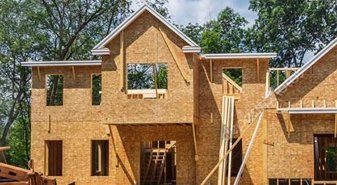 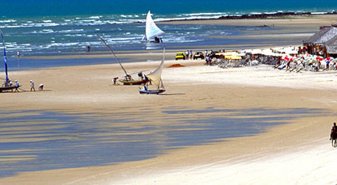