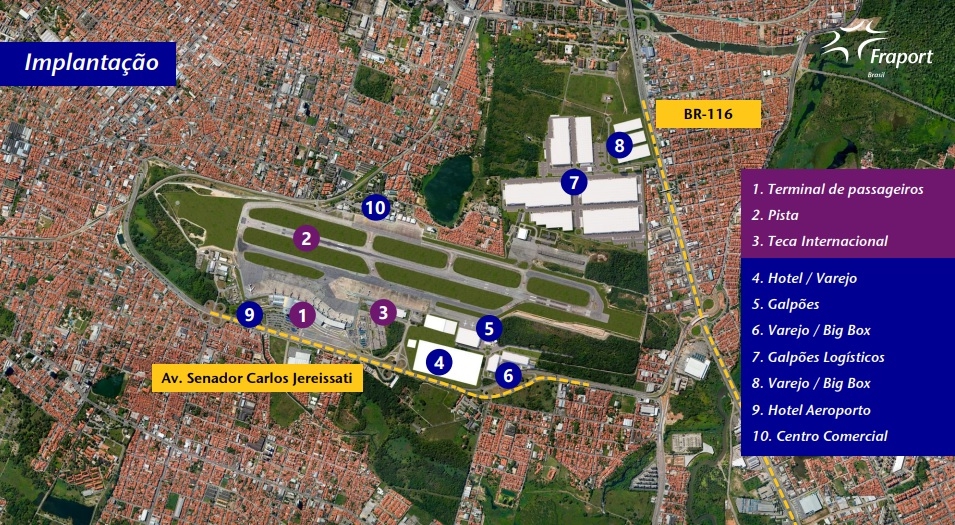 Fraport Brasil has just announced major expansion of adjacent land to create Fortaleza Airport City. The over 800,000 square metres of development aims to add to the airport’s facilities and attract investors to the Ceará property market.

The project will be developed by Fraport Brasil, the current managers of Fortaleza Airport. Once complete, Fortaleza Airport City will house two hotels, a logistics centre, shopping mall and supermarket.

“The objective is to present the Airport as an extension of the city,” said Fraport Brasil. “We aim to appeal to interest from investors in the property market and contribute to the socioeconomic development of the region.”

The new project contemplates the construction of two hotels in Fortaleza Airport City. One will specialise in accommodation for business travellers, while the other will serve tourists in general.

Both will have independent access to the Airport as well as parking space and connections with the Fortaleza metro system, VLT.

The lion’s share of Fortaleza Airport City (nearly 600,000 square metres) will go towards creating a logistics centre. Its location, next to exclusive access to the BR116 highway and its connection to Fortaleza Airport will enhance its potential for distribution.

Fraport emphasised that the location and connections make the centre is an excellent opportunity for companies dedicated to e-commerce, retail, logistics and light industry. “The aim is to facilitate distribution logistics, both by land and by air,” they said.

Fraport Brasil lists the advantages of the Airport, which enhance the potential for business and investment in the new Fortaleza Airport City:

·         Fortaleza has a strategic location for access to the northern hemisphere, namely Europe and the US.

·         Fortaleza is one of the most important cities in Northeast Brazil and the fifth largest in the country.

·         It has a population of over 2.6 million and the highest GDP per capita in Northeast Brazil.

·         In addition, Ceará is a major tourist destination within Brazil.

The largest airport in Ceará is gradually regaining its passenger traffic. Domestic travellers in May this year numbered just over 387,400. The figure is 86% higher than May 2020 and just 17.4% shy of that registered in 2019, prior to the pandemic.

International passenger traffic still has some catching up to do. The Airport welcomed nearly 20,000 foreign tourists in May this year, compared to 38,700 in May 2019. However, the statistics for 2022 are way ahead of those registered in 2021 when just 2,200 international travellers arrived at Fortaleza Airport.